Speaking of courses. This is me on the Chicago marathon course. Not running because I’m injured…but at least I have balloons!

Oh how running can change your perspective.  What this contestant said really rings true to running and especially for anyone new to running or if you have taken it up as a resolution.  Heck, even the most seasoned runners could use this reminder from time to time.  Running isn’t easy or pretty.  It makes your lungs burn, legs ache, you sweat everywhere, smell bad, and are often covered in snot.  But what running can do for you is amazing.  Sure there are the beautiful legs, toned abs, and endorphins.  More importantly I went from that former skater who criticized every single thing I did to running for miles and saying awesome things to myself.   I have mentioned before that as I started to run I began speaking kindly to myself during my training.  What an awesome thing to find within you, the power to treat yourself well!

I started running races and did pretty well, but I certainly wasn’t winning and for the first time in my life I was ok with that.  I was struck by how many people lined the courses cheering on runners they didn’t even know.  They were cheering for their hard work and accomplishments because they knew running was hard.  They didn’t care that I wasn’t first or even if I was last.

I once placed first in my age group and won a bag of chips and salsa!

My first trophy ever! I placed 2nd in a trail race through the Rockefeller Estate. That is the Hudson River in the background.

I paid attention to my race times and was lucky to usually outdo my previous paces. However a few summers ago I ran a local 15k that has become a summer tradition for me.  It was hot, really hot, and humid.  I felt great from the start but as I hit the halfway point, I knew it wasn’t going to be a great finish.  I felt myself fading, my stomach getting sick, and it kept getting worse.  When I crossed the finish and saw my time, I knew it was one my worst performances.  Yet I was able to sit back and think about how darn hard that race was and how I had kept it together mentally and kept pushing through some tough conditions.  I logged my race time in a scrapbook I keep and shrugged it off.  I’m not running for any other reason than to feel good about myself and my body, the races are just a fun way for me to express myself as a runner. 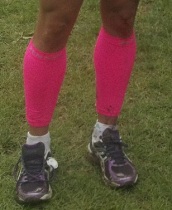 My best pride check. Race up a mountain ended with a cut knee, thorn in my hand, and my shoe is untied because I sprained an ankle.

Jillian Michaels said something in response to the contestant’s comment, “Fear is fear.”  This is so true.  We all have fears.  Whether it is getting off the couch and walking a mile, trying your hand at running for the first time, or getting yourself through a half or full marathon.  The only way to face that fear is to sit down and figure out a plan.  What is the best way to work through that fear?  Is it your diet?  A training plan?  Seeking help?

Find that first step to facing your fear and then start working towards it.  Realize that it will take time.  I spent years running 3 miles a day and it felt hard and I hated it!  I finally realized that it wasn’t that it was hard at that point, I was just making it seem like a huge deal. I decided to try running 5 miles and with a little effort it felt great and I couldn’t stop telling everyone I saw that I ran that far.

Remember that there will be hurdles along the way and you just have to take them in stride.  I have been plagued with injuries throughout my years of skating and running.  If I hadn’t rolled with the punches I would never be where I am today.  When I was 14 I destroyed a joint in my knee and spent a half a year waiting to find a doctor who could figure out just what to do to fix me.  I owe so much to the doctors who performed a surgery that was both experimental and the first of its kind.  I spent another half of a year recovering from the surgery, spending a majority of it in a cast that went from my hip down to my toes.  I could have given up, and many people figured I was done with my skating.  But I made a plan and I stayed positive and had many successful years of skating as well as running.

Finally, not long ago I went to listen to “Competitor Magazine” editor Matt Fitzgerald speak.  He talked a lot about fears and how to deal with them.  One thing he mentioned was that many people are afraid to start running or doing races because they fear that they will be the last person to the finish.  Statistically speaking, Fitzgerald says that you are very unlikely to be the last person to cross the finish.  Another point he made was that if you have ever been to a race and watched the last person cross the finish, that person is usually the one who is just so happy to have finished to begin with.

So take a breath, make a plan, talk kindly to yourself and may the course be with you. 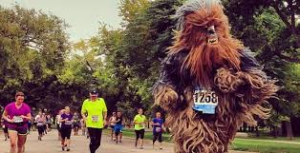 I have to finish by showing you a picture from my run last night.  The past couple of days I have been a bit moody and irritable which is a bit unlike my usually upbeat self (some may disagree…hi mom!).  I decided to take the early evening and run up to meet my husband after his hockey practice.  I have been wanting to do a half marathon lately and it worked out that as I wound my way along Lake Michigan I finished with 14 miles (take that half marathon).  It seems that was just the trick to put me back in a great mood.  Hello endorphins!

As I finished my run I went by the Baha’i Temple, one of only 7 in the world.  It was just so beautiful lit up in the dark.  I had to take a picture to share. 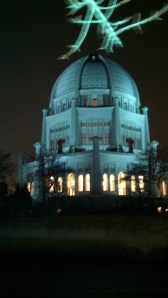 18 thoughts on “May The Course Be With You”