Yesterday I woke up and was scrolling through Facebook over a cup of coffee.  I asked my husband if he knew that it snowed the night before.  He hadn’t and I hadn’t either.  I looked into the courtyard and didn’t see any signs of snow.  Must have happened late at night when all of my wild and fun friends are still out to witness that mess.

And then I stepped outside.  There it was…..snow.  On the cars, scorching the new lilies that finally popped up, and all across the sidewalk.  I uttered a few choice words I am sure.  We left this mess in Chicago!  April must be playing a joke on us.

Whatever the deal was I decided to get on with my run.  I love running up the East River each morning and taking the bridge over to Randall’s Island.  Over there I can run around all of the different paths and cover mile after mile without worrying about the cars or people.  But I was met with a surprise when I hit the bridge in the morning.  It was completely iced over!  I shuffled my way up, pulling myself with the railing as I went.  I then used my skating “skills” to slide down toward the island.  Those of you who know my lack of coordination can imagine what a potentially bad idea this was. 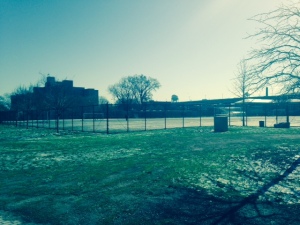 By the way it is funny that I love that little island.  It has changed  so much over the years and I just like how nice and quiet it is.  I often feel like I am out of the city for a little while, and it never hurts to run by the FDNY training center when they are out training!  However I mentioned to someone who also runs that they should go check out the island and raved about how much I enjoy it.  They responded by telling me it was amusing to hear my side of the story because he spent years as an EMT and the island is home to both a psychiatric hospital and two homeless shelters and he saw a much different side of that island.  I laughed and said that they were both there but it just keeps everything interesting.  I guess it all depends on perspective!

I had to leave you with a great “only in NYC” picture from the other day.  We were walking home and my husband stopped and said, “Check out that parking job!”

Everyone is always fighting for space here!