This past Saturday I was having a bit of a rough day.  I wasn’t feeling like myself.  I am not the type of person to have a good scream or a cry, or to even let myself just have a bad day.  I don’t deal well with emotions and don’t keep things in.  I am not even one to just feel sad or down for a day.  So feeling like I was in a funk I did the only thing I knew would fix it…..

I figured a few extra miles would just help pile on the endorphins.  If anything some time on the pavement with just me and my thoughts was sure to clear my head.  It just so happens that our time with Flat Stanley is coming to an end and I wanted to take him up to the George Washington Bridge to take a picture of the Little Red Lighthouse underneath the bridge.  Did you even know there was a lighthouse down there?

I think I knew this was going to turn into an epic run because I made sure to leave with the appropriate equipment: my phone (which I texted my husband first to let him know where I was headed), my Spi-belt, a packet of Pockefuel for mid run fueling, my Simple Hydration bottle, and Flat Stanley.  It took me 7 miles to reach the lighthouse.  We took some pics and then I decided to head back down the west side of New York.  I decided to continue south down to Chelsea Piers and then wove my way back north and east.  I finished at exactly 20 miles in front of a grocery store that carries my favorite sparkling water.  Hydrated and worn out, I was effectively back to my old self. 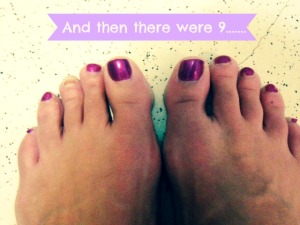 Oh yeah…and sometimes this happens after a long run.  My husband wanted to know if I was going to paint over the missing nail.

I didn’t always love doing long runs, but with some proper preparation and a few lessons I have found that they can be really quite fun and you can learn an awful lot about yourself during these runs.  I wanted to share a few things that I have found to be most helpful to get started and make it through your epic runs.

First, plan ahead.  Make sure you are plenty hydrated before you head out.  It is preferable to start hydrating the day or even days before.  You will be amazed at how much easier it is to keep going when you have enough water inside you.  Make sure you also eat a proper breakfast.  You want something that consists of a bit of carbs, fat, and protein.  For that reason both peanut butter and cream cheese are excellent additions to your breakfast.  You will have to find the right combo for you.  I am one of the lucky runners that can go for upwards of 15 miles without needing extra fuel or water on a run.  But on the flipside I do eat a bit more before I head out than many other runners.

Make sure you either take some additional fuel with you or know where you can get some along the way.  I added a Pocketfuel to my running pack but also knew that there were several running stores near my route if I needed something else.  Had I been running somewhere a bit more remote I would have added a second pack just in case.  Just because I haven’t yet hit that wall, I know it is out there and will get me someday.  I also always keep some cash with me for a extra bite to eat or a cab if I can’t make it home.

If you are doing long runs as part of your training try to find different routes to make it fun.  During our marathon training we got sick of running the same loops around Manhattan so we would find rail trails and bike paths in nearby towns to do our LSD runs.  This made each run a new adventure and kept it interesting.  The hardest part of long runs can be the mental aspect.  Keeping it exciting eliminates dealing with mental monotony.

Don’t count the miles.  If you start doing this, your long run is going to feel like a LONG run.  Let your mind wander.  Listen to some music.  Figure out something that has been weighing on your mind.  Every Friday Mark Remy posts a list on runnersworld.com.  The List contains short articles and facts about running from the week.  They are both interesting and comical.   Check them out over your morning coffee and you will have plenty to think about.

Have something to look forward to after your run.  For some reason I craved Diet Coke from a soda fountain after my long training runs.  This is weird because I don’t really drink soda and I craved it from the one place I NEVER set foot in….McDonald’s.  But for some reason I couldn’t get the thought of that bubbly soda out of my head for the last few miles and my husband knew that our first stop was McDonald’s when we got back in the car.  The other thing we always looked forward to was trying dinner out at a new place or at a favorite restaurant.  At that point, you have earned it!

Before a 20 mile training run last year we were hanging out in the parking lot of a new path we were going to try.  A gentleman stopped us and told us that there was a microbrewery in the back of the building across the street from the lot.  Apparently they were only open on Saturdays and gave free tastings.  My husband thought about those free beer samples for the last few miles and confidently claims it carried him through!  Hey, whatever works.

A special thanks to www.rushingduck.com for the ultimate end to a long run!

Running long can be both a struggle and an amazing experience.  With a little preparation you can turn it into a really great time.  And then you can go and eat a lot of food!  Can you tell where my mind always goes to first?

46 thoughts on “Learning To Love The Long Run”