We survived the epic dock day!    In the past 48 hours we have managed to drive to Michigan, paint a full room, purchase a dock, load a dock, remove former dock, put the new dock in, and then disassemble the old dock.  The good news is, we are all still talking to each other and hopefully we can spend a little bit of time today enjoying our house.

I had some requests to share the changes with you and I don’t want to disappoint.

First there was the entry room that despite having dark paneling was our last priority on the house because it was the lightest of the paneling in the entire house.  Looking at the before and after pictures you would never believe that.  I can’t believe how dark the room used to look.  We also replaced the sliding glass door on the room the last time we were up here because the other one was pretty crappy and had some gaps in it.  Last year was the summer of garden snakes making annoying entrances into our entry room.  Eek!  Not only are they creepy but I find them to be rather rude, showing up uninvited like that. 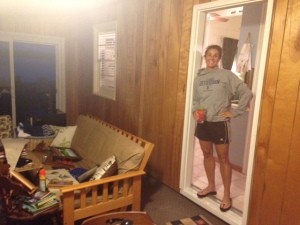 Yesterday we drove over to another lake about 10 minutes from our house to retrieve our “new to us” dock.  There was only one slight problem.  The house sat up high on a hill on a very narrow lot.  There was no way to carry the pieces of dock up to the car.

So my husband and dad had to float each piece over to a neighbor’s house that was kind enough to let us use their much more manageable stairs.  It was pretty funny to watch the process.  However, the woman who sold us the dock told us that each piece weighed only 125 pounds and given the fact that four of us struggled to carry one piece as a team, I am going to go ahead and say she lied or at least stretched the truth….a lot!

As we were walking back and forth carrying pieces of the dock to the truck I kept noticing a very cool rock each time I passed by.  Just as we were about to leave I stopped to pick it up.  I had thought it looked very familiar and after holding it, examining it’s shape and uniformity we were all convinced it was an arrowhead.  I kept it, because it was really too cool to leave behind.  Did I mention I am a bit of a Michigan history dork?

Once we were finally home the day continued with a silly adult version of super heavy Legos.  Thanks to my husband and parents, we have a fantastic final product.

Night and day from this before pic!

On top of that I even managed to get a 7 mile run in yesterday morning.  A funny thing happened on my run.  As I passed a house I swore I saw a bear and slowed down to a walk.  Then I stopped and kept leaning in different directions to see what it was.  Finally I realized that it was a fake bear used as a lawn decoration.  It has been so long since I have been able to run around and really enjoy our house up here.  Somehow I forgot that we live on Bear Lake and everyone has bear everything on their lawns.  Let’s just say I was rather jumpy the entire run!