The other day I came across an old article that I somehow had never read.  In short, “How Oprah Ruined The Marathon” discusses the birth of the marathon boom thanks to Frank Shorter and then, according to author Edward McLellan, a second boom that brought about the demise of the original marathon concept thanks to Oprah.  Forty years ago the New York Marathon had no sponsors and less than 250 participants.  There were no Garmins on wrists, no Spibelts or fuel belts, and no one was carrying packets of Gu to get them through the race.  According to McLellan, most of these marathons consisted of very serious runners who dedicated their lives to finishing with impressive times.

I remember when Oprah trained for the Marine Corps Marathon.  I wasn’t a “runner” at the time but I used to watch her show.  I recall being amazed to see a woman who had so openly struggled with her weight all of her life tackle such a huge goal.  McLellan claims that Oprah inspired thousands and lowered the bar for everyone with her marathon finish.  Let me be the first to say that Oprah’s 4:29 marathon is actually relatively impressive.  I have coached hundreds of athletes over the years and of the several hundred who have finished a marathon, there is a big percentage who would give anything to have a 4:29 or less  finish.  As their coach, I can also tell you that those people who ran 5-6 hour marathons worked incredibly hard and dedicated months (if not years) to finish that race. 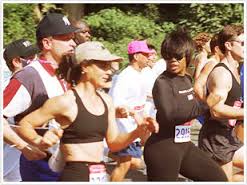 There are very few runners (and yes they are all runners regardless of their 3 hour or 6 hour finish) that I have trained who did not put forth a full effort.  I have watched them lose dozens of pounds and struggle through injuries and mental obstacles.  I’ve seen the tears when they have to sit out with stress fractures or IT Band Syndrome.  I’ve listened to stories of inspiration for their reasons to get out there.  Some run to become healthy, some run to honor a loved one, others run to prove they can.  But they all pushed themselves harder than they ever had.

Many of those first time marathoners became lifelong runners.  Several were so inspired by that first race that they rededicated themselves to the distance and shaved half an hour or even an hour off of their first time.  Take that low bar!

These people aren’t the reason Americans aren’t winning marathons. The top trainers and coaches in this country can’t figure out why we aren’t winning races.  But it certainly isn’t the fault of that 5:30 marathoner who finishes hours after Ryan Hall comes across that line.

Sure there are thousands more people running these races than there used to be. But that can only help the situation. When Chicago has a field of 45,000 participants that is a lot of registration fees.  Races can in return have those incredible amenities and offer prizes to attract elite fields.  There can be a fully stocked course (and great beer at the finish).  AND it can inspire a new wave of young runners who line up along the course or watch from their televisions in small towns far from the actual race.

Plus, these races often offer guaranteed entries to faster runners.  They also offer corrals based on paces.  Ryan Hall isn’t taking off at the start next to someone running a 6 hour marathon.  Because of these larger fields, races have become well oiled machines.  Runners are packed together based on paces and leave in waves to ensure everyone gets a fair chance.
And those charities like Team In Training?  Those offer opportunities that go beyond just the race.  Charities programs offer the training assistance that new runners need.  They offer a lifeline for friends and family members dealing with illnesses and other issues.  They give reason for inspiration, which is often necessary for pushing through 26.2 grueling miles.  Beyond that, they raise hundreds of thousands of dollars for incredible causes.  I find it beyond amazing that running can offer such a grand experience while touching the lives of so many people.  Not many other sports can provide such an opportunity. 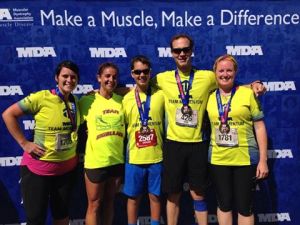 As I have coached so many marathoners I have heard countless stories off how training has changed their lives.  Dealing better with depression.  Coming off of blood pressure medicine.  Being a happier and nicer husband and father.  Losing weight to be able to start a family.  Those are just the beginning of the countless stories I have personally heard from people I have worked with.
Most people I train couldn’t tell you who the Penguin is (unless we are discussing comics).  However, the great majority of them know about Meb, Ryan, Deena, and Shalane.  But honestly, who cares?  The marathon is an incredible journey.  For some it is a dream to make an Olympic team, or to qualify for Boston.  For others the marathon is a bucket list goal or a lifelong dream.  Whatever it is, I love that running allows everyone the same opportunity on their own terms.
I am so proud of Oprah and her accomplishment, just as I am of anyone who tackles the marathon and follows through.  Thanks Oprah for showing so many of us what a great experience it can be! 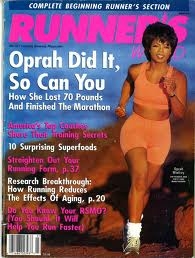 31 thoughts on “Thanks Oprah, You Made The Marathon Awesome”