Happy Monday. Its back to reality here in Chicago after a week and a half in mostly sunny Florida.  On the bright side we arrived back to 40 degree temps which is much better than the single and negative digits we left with over a week ago.

Florida was pretty good to us and we even had some 80 degree days. Most importantly we were able to run in shorts and I was able to get in 7-8 miles each day, including some beach runs.

Apparently the weather likes to play jokes at the end of the week and we had a repeat of what we dealt with while at Disney. Friday was cold and rainy. But when life hands you rain in Florida you hit the outlets. Twist my arm!

In typical running  dork fashion I was playing around on the computer earlier in the week and ended up on runningintheusa.com. I mentioned to Rock that there was a Chasing Leprechaun 10K later that weekend about 20 miles away and he was of course game.

So Saturday we got up bright and early and drove over to the World Golf Village where the race was being held.

The weather was perfect for a race with temps in the low 50’s and partly sunny skies. The race wove around the property of the resort, which was beautiful. And yes there was a leprechaun. 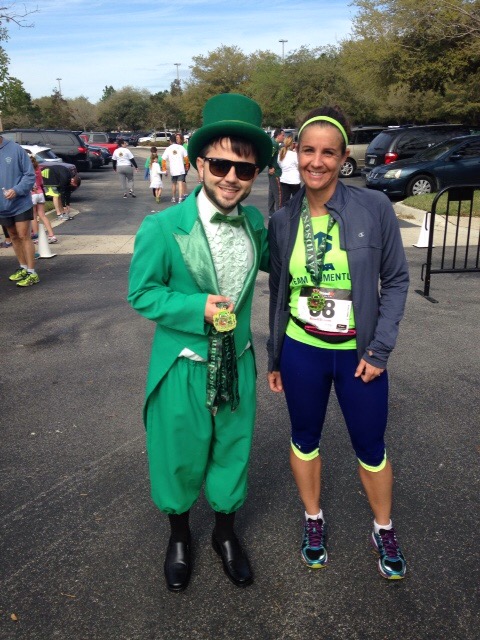 This wasn’t a huge race and it set off at the same time as the 5K (sort of annoying) but about a half a mile in everything spread out nicely and I got into my running groove.

At just one day shy of being 15 weeks pregnant I wasn’t “racing.”  I have been given the go ahead for the time being to run as usual, just at a pace that does not over exert my body.  Most days I run about a minute per mile slower than normal.   Of course the race got me excited and I did run a tad faster but I did a great job of keeping a nice and easy pace for me.

As the race went on we hit some pretty strong wind and the field slowed down.   These are the conditions, along with hills, where I tend to excel during races and just focus on my running. I slowly started to move forward in the pack and at the turn around realized I was in 4th place.

My placement wasn’t at all my focus but I was happy to be running a strong race and to see where I was.  I kept reminding myself that I was there for fun and baby Dudek was the priority. I even talked to myself a tad during the race because it is a great way to measure your exertion. If you can comfortably chat while running you are holding an easy to moderate pace.

I won’t lie though. I was holding out hope for an age group placement once I knew where I was. But in the last half mile I inched up on the girl in third place and with a quarter of a mile left I ended up passing her to finish in third.

It was a pretty nice feeling to know that I could still run. Sometimes I wonder if over the course of my pregnancy and all of these slower months, if I will lose my pace. I know it is silly but this was a great reminder, even if I wasn’t running at my pre-pregnancy pace.  And the baby and I had a successful first race together.

On top of that Rock had a stellar race and ended up first in his age group!  It was a successful run for all. Did I mention he ran five miles before the race because he is back in marathon training?!  What a rockstar! 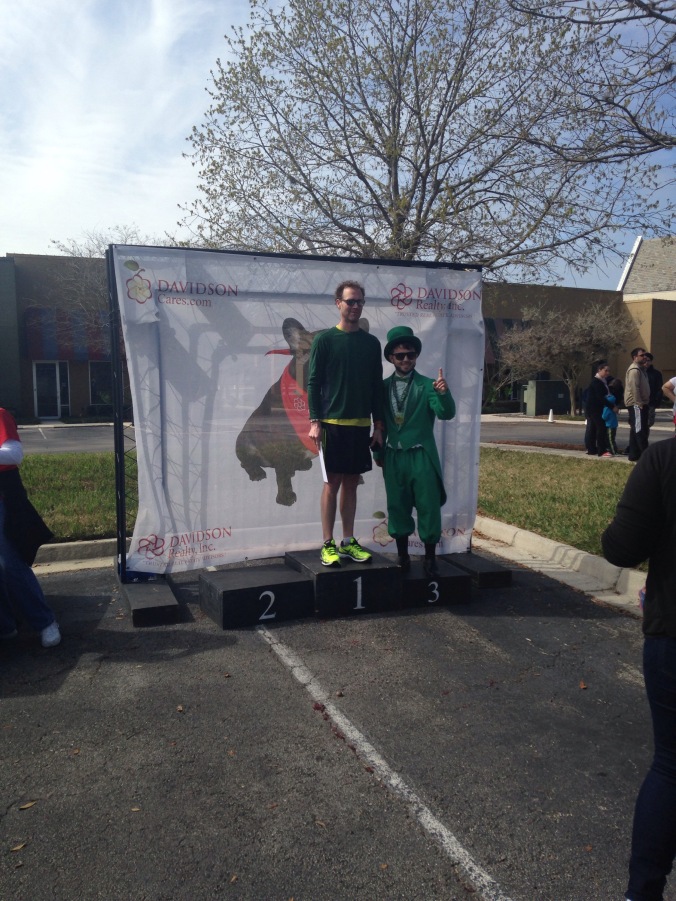 The only snafu of the day was that shirts ran out almost immediately and we didn’t get one despite preregistering. Also some people who signed up for the 10K switched to the 5K during the race but the computers couldn’t tell the difference. At the end they had the first three women coming in with paces faster than all of the 10k men and the real first three women in 4-6th places. Had someone not pointed it out the directors never would have noticed.  In fact the head woman’s initial response was, “Well if that is the case hopefully those top three people will be honest.” The men’s race had the same issue. Everyone was a good sport about it but as one guy pointed out, if you pay for a chip timed race it is nice to think they time it correctly and accurately. Fortunately they rectified the situation and were nice about it in the end.

So with medals in hand and some prizes too we wrapped up a great vacation and here we are back again in Chicago.   Although we did manage a celebratory lunch at Chik-Fil-A first. Rock had never been so we had to go. It feels great to be home now and in temps that are bearable to run outside with again!

How was your weekend?  Any races?