What a weekend!  After a long car ride north, we arrived in Duluth, Minnesota for Rock’s much anticipated marathon.  Some of you may remember that he ran Chicago this past fall.  Chicago started out really well for him and half way through, as I was coaching, he called to tell me that something happened to his hip flexor.  It was so painful he considered a DNF and dropping out, but instead decided to walk to the end because he had worked too hard all summer not to cross that finish line.  It was a gut wrenching way to end a training cycle and he has been wanting revenge ever since.

This past winter we were playing around with races online and ended up deciding on Grandma’s Marathon.  A few of our friends had done it in the past and had a great time and one of my favorite bloggers Mother Racer did it last year (as an elite!).  There were a few things that were alluring about this race.  First, the time of year is perfect for us.  We have a sports program we run in NYC that keeps us busy all spring and into mid-June.  This race fell right after we would return home.  We both love late spring races too for the perfect temps and the fact that you can avoid most of the terrible winter running during training. 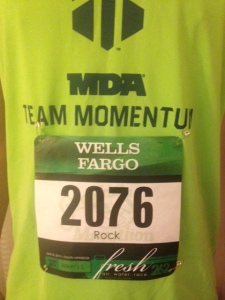 On top of all of this the race is a perfect size with a field of about 7,800 runners; not so big that you have to weave your way through runners for the first few miles, but not terribly small.  Our first marathon we ever did had a field of less than 800 runners.  By the end of the race I was near the front and didn’t see another woman for the last three miles, let alone very many runners in general.  This can be excrutiating mentally.

Even better, this course is rather flat or at least gently rolling.  It also follows Lake Superior for a majority of the course so you can bet on some cool breezes off of the water.

Let me tell you, this race did not disappoint in any way.  Duluth is a city of about 82,000 people and every single person knows there is a marathon in town and welcomes runners with open arms.  How many times have you gone to a race somewhere and when you mention it to a local they cock their head in surprise and say, “Oh there’s a race going on?”  Not here!

When we checked into our (very, very expensive) hotel we were greeted by front desk staff all wearing Grandma’s Marathon shirts.  The major downside to a big race going on in a smaller town is that hotels are at a premium.  Rock registered the day the race opened and we immediately booked a hotel at the Residence Inn because we are Marriott rewards members.  The rooms were almost all booked then and we cringed at the hotel rates but sucked it up just in case.  (Side note, there is a local college that offers dorm rooms at a much cheaper price point but you have to wait til March to get in on those).

The hotel staff gave Rock a gift bag with fruit, water, and energy bars inside.  They also were very knowledgeable about the race itself and pointed us in the right direction to get Rock on a shuttle bus to the start the next morning.

My biggest gold star goes to the hotel for having an early breakfast at 5:00am for runners.  Typically they offer waffles, pancakes, eggs and sausage.  But they had yogurt, granola, cereal, fruit, bagels, and energy bars set up.  How many times do you wish the darn hotel breakfast was early enough to at least get a coffee before you go?  Later in the day I noted that they still had fruit and energy bars out for guests well after the race had finished.  Major thumbs up for this!

The weather didn’t cooperate and poured during the wait for the start and for the first half of Rock’s race.  But he said that he had a really nice bus ride out with the other athletes.  I opted to stay back and get my run in that morning too but I could have hopped on a local train that goes out to the start and then follows the lead pack back into town. 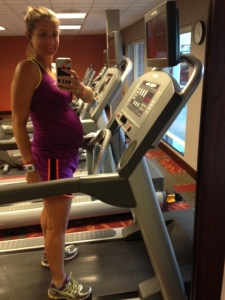 Baby and I got in a nice, dry 8 miles, while Rock was waiting in the rain.

Despite the rain, Rock had a ton of really positive things to say about this race.  There wasn’t a ton of fan support along most of the course but he said there was plenty enough to keep you going.  He loved the course and in general thought the weather (minus the rain) was fantastic.  His biggest take away from this race was that it was what he called a “runner’s race.”  Just about everyone he saw on the course was a “runner” in some fashion.  He didn’t see a lot of walkers on the course and although you saw athletes of all paces, everyone clearly looked like they had trained and were putting their full effort into this event.  This makes Grandma’s a great spot to go for a PR or try to BQ, and there were a lot of BQ’s going on there Saturday.  I also noted that several people were also there trying to make the Olympic Marathon Trials as well. 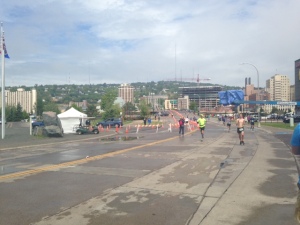 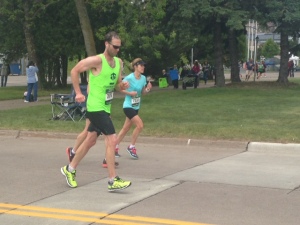 This train takes spectators out to the start and follows the lead pack back in for 26.2 miles. As you can see I was too lazy to step out into the rain to take a decent picture. But this is pretty cool!

In the end, his hip flexor started to give him a bit of frustration near the finish.  But he was able to hold out and run a very solid race.  He didn’t quite hit his goal of a new PR but he still ran a solid marathon.  I was super proud of him and got tears as I saw him at mile 25.  Admittedly they were mostly tears of pride but there was a tad of marathon envy in there.  It is nearly impossible as a runner to go watch any kind of race and not get worked up just a little bit!

Congrats Rock on a great finish.  Congrats to everyone who raced this past weekend.