Part of my job with training marathoners is running with them during the week or on their long weekend runs.  During this time we talk about everything but one of the main running concerns I hear about is getting passed.  Is it okay to get passed?  Do you as a coach ever get passed?  Will I ever end up passing someone?

The first advice I try to give is to stop focusing so much on people passing you.  Everyone, and I mean everyone gets passed.  Even the most elite of runners can’t always be in the lead and if this isn’t the case, it is extremely rare.  Sure it can be discouraging, but you need to remember that there are so many reasons why people are moving ahead of you.  And, the person passing you is most likely so wrapped up in their own little running world that they are paying no mind to the fact that they squeezing by. 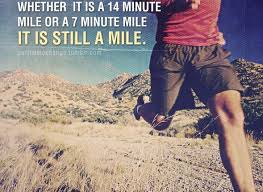 First, let’s focus on why you might be getting passed.

Weather:  When it is hot and humid, your pace is going to slow significantly.  If you are following a training plan and have certain mileage you are required to get in, that should be your first priority, not your pace.  That means you can’t focus on how fast you are going or how fast others around you are going.  Your only goal is to finish that darn run.

Mileage:  Have you ever considered that perhaps the people going by you are doing much shorter runs?  While you are conserving energy to do a 7 miler, that person running by you might be out doing their daily three.

Maybe they aren’t training for anything:  And that means they can throw caution to the wind and just go for it.  That is the perk of not training and also the perk of being in training.  When you don’t train you can do whatever the heck you want.  And while on a plan, you can blame it on the plan.

Some people are just plain faster:  And that is okay.  We can’t all be Ryan Hall or Meb.  Then races wouldn’t be very fun.  That’s why races have different pace groups.  Sadly, my legs will never be as long and lean as Shalane Flanagan’s.  There isn’t much I can do about that.  But I do know that for my age group and pace group I do a pretty darn good job.  I have to set realistic goals within my own capabilities. 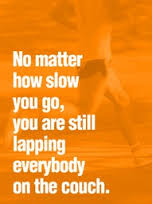 Maybe you look so great from behind that it is distracting:  This is the one I would always fall back on.  Running does give you great legs and a nice firm tush.  When in doubt, assume that your running body is making it hard to focus and this person had to get around you just to continue doing what they were supposed to. 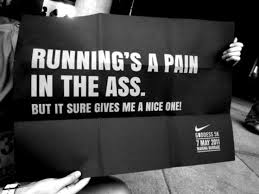 Truth be told, we all will get passed.  And if you stick with running long enough you will pull ahead of someone.  My highlight this summer was at 30 weeks pregnant I passed a cyclist.  Personally I found it ridiculous that I was passing someone who was cycling slower than I was running, but in the end it felt great that I might just still have it!

Running is a personal journey.  We all have our own goals and aspirations.  It is important that you keep the focus on you.  Be selfish.  Focus on getting through the darn run.  And if people pass you, give them a wave.  But remember that you are awesome for being out there and everyone eventually sees someone faster than them.  Oh yeah, and you look great from behind!

21 thoughts on “Set Aside Your Worries About Being Passed”