What a weekend.  And yes, I know that the weekend was days ago.  But a lot has happened and we were exhausted.  It has taken me until now to be able to sit down and do a quick recap.  I didn’t do this race as a runner, but instead as a coach for the Muscular Dystrophy Association’s Team Momentum for the second year in a row.  This year we had 185 runners.  Pretty impressive considering that MDA Team Momentum’s second birthday is coming up this winter!

My parents came in on Thursday to help out with little Mary.  I had asked them months ago when I thought my due date was going to be August 30th.  My plan at the time had been to be on the course to assist runners.  As you may remember, Mary arrived three and a half weeks early.  I was still planning on just being on the course for the athletes but at some point the week before the race, I decided that since I had a bib, I would go ahead and run the race alongside the athletes.

Friday, we went to the expo.  This place is a running nerd’s mecca; a dream!  There are free samples of just about any gel or product you can want and you seriously could buy just about the coolest running gear ever there.  I held out, because I had to head over to Fleet Feet later that day.  Wouldn’t you know that my Garmin would die on Thursday?!

Friday evening we hosted dinner for a good friend I had met online awhile ago.  Mother Racer has become one of my favorite bloggers and a good friend over the years.  I admire her as a runner, a mom, a coach, and a woman who is deeply rooted in her faith.  It was so nice to meet her and her husband.  And to be honest, it felt like we had been friends for years.  This woman is an awesome runner by the way! 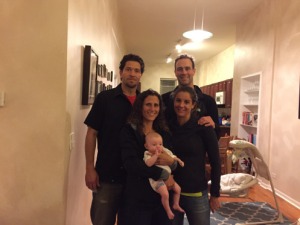 Saturday we had our team dinner for all of the athletes on MDA Team Momentum.  I’m not going to lie.  I woke up sick to my stomach thinking about speaking in front of 300 people.  But as you can see, I survived.  Mary was gifted an awesome Team Momentum outfit from team member Nora when she was born.  I was so excited to have her arrive at the dinner properly dressed for the night, including sneakers (thanks Stephanie!).

In typical night before the marathon style, I think Rock and I both got about 4 hours of sleep.  And that was miraculous.  Four hours of uninterrupted sleep, thanks to my mom and dad for watching Mary.

The weather on Sunday was a little warm.  Great for a running coach to be on the course for 5+ hours, but very difficult for the athletes.  There was a lot of cramping and other issues, but everyone came up big and made it to the finish. 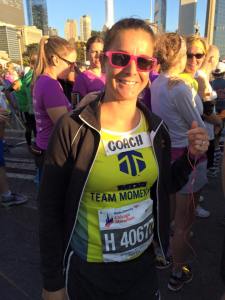 Rock and I had a blast on the course, helping athletes along and checking in on everyone.  While it is awesome to be able to run a race for yourself, it is incredibly rewarding to have the opportunity to help a group of athletes that you have been interacting with for three months see that finish line.  I am also always amazed by the positive attitudes and desire to push through struggles along the way.  This group of athletes was amazing!

We didn’t arrive home until after 5:00pm that evening.  To be honest, I don’t remember much of what happened the rest of the night.  I was exhausted and my body was pretty darn sore.  That was to be expected since I hadn’t properly trained for a marathon and had a baby nine weeks before.  But it was one  of those, “Hurts so good,” moments.

Again, another major thanks goes out to my parents for watching Mary and our dog that night so that Rock and I got a solid eight hours of sleep.  This was a huge help because the next morning it was out the door and into the car.  We were on our way to NYC for three weeks of work.

We drove 12 hours on Monday and made it to Wilkes-Barre, Pennsylvania for the night.  As you can see, we thoroughly enjoyed stopping at gas station for post marathon snacks.  It was also hilarious to see us get out of the car each time.  Between stiff legs from the drive and and sore bodies from the race, we could have been on the set of The Walking Dead. 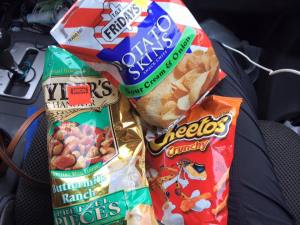 By early Tuesday morning we had arrived in Peekskill, New York where we are staying in a cute motel for the next three weeks.  We are right on the Hudson River and enjoying the mountains and fall foliage all around us.  I can’t wait to take Mary into the city and show her all around.  We also have awesome plans to show her our favorite places in Upstate New York.  We really have arrived at the perfect time. 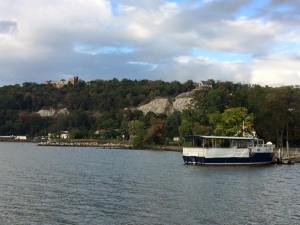 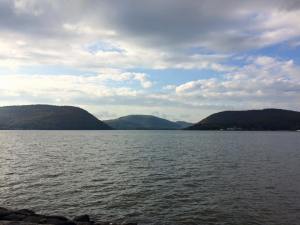 I have some awesome recaps of amazing things I saw along the race and those will show up in the next few days.  A huge shout out to everyone who ran Chicago and Hartford last weekend.  You are all awesome!

22 thoughts on “Chicago Marathon in a Nutshell”