Gosh, does it ever feel great to be back in the Midwest.  Fall is in the air, and Chicago is flat as a pancake!  There is a reason why people like to run the Chicago Marathon.  Sure the people and the sights are great, but Chicago is one flat land and that makes for easy, speedy running.

When Rock and I arrived in upstate New York a few weeks ago we were met with the most beautiful sights.  The trees were changing and we were staying in a cute little motel right on the Hudson River.  Check out the view from our room.  Not shabby.

That was until I went for a run.  The first time I took a route that had me running over a rolling terrain.  But it went through town and stopping and starting with the traffic was not what I was looking for.  One of my favorite things about being in a new spot is getting out for a run and exploring.  I soon found a route that followed the river for awhile and headed out to an old pier.  From there I wound around residential streets and saw the cutest houses.

I loved this route, except for one big problem…..hills!  The entire route was uphill until I decided it was time to turn back home.  And we weren’t talking rolling hills.  These are foothills of the mountains.  One day as we were driving to get something I remarked to Rock that we were in the area where I was doing my runs.  He kind of laughed and mentioned something about mountain running.

So yes, that first half of the run sucked.  And my paces blew!  I would look at my watch and feel pretty awful about my paces.  I felt like I was out of shape or losing my endurance.

However, over the next few days I noticed that my legs were starting to feel achy and also stronger in different places.  And then something awesome happened.  I went for a run in Central Park.  If you have ever done the loop of Central Park, you know that it is rather challenging six mile loop of rolling hills.  It is a great place to go for a workout.

As I started running the park, I had very little expectation.  My pacing had been slow ever since we arrived after the marathon and my schedule had only been allowing for sporadic runs.  But when my Garmin beeped after the first mile and I looked at my watch, I was running 30 seconds faster than my typical pace.  I was running what I would consider a speed workout pace.  The next mile beeped and I was running even faster!  Remarkably, I wasn’t trying to push the pace and I didn’t feel winded either.  And my legs felt incredibly strong.

This was a true testament to the benefits of training on different terrain, notably hills.  While I definitely recommend that anyone who is going to a hilly race make sure they include hills in their training, everyone can benefit from some uphill running.  Changes in elevation, even minor, engage different muscles.  It makes them stronger and uses different muscles that we don’t always call upon during our daily runs.

It will not only make you faster but a stronger and healthier runner.  Hills provide a challenge that can also work as excellent mental training.  Working to push past new barriers will strengthen your mind come race day.  And if anything, you will appreciate your flat runs even more. 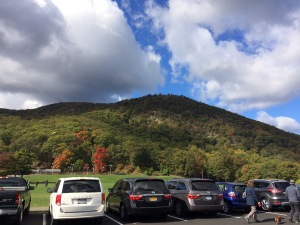 We stopped at Bear Mountain and went to the zoo. Rock and I did a trail race here once that was all uphill. It was brutal!

Don’t have hills near you?  Go ahead and take it to the treadmill.  Research has proved that we no longer need to run on any incline to mimic our typical running.  So use the occasional run as a chance to bump up the incline for a bit or create a hilly fartlek workout on the mill to mix it up a little.

Do you love or hate hill running?