Happy New Year friends!  I hope you had a lovely holiday and fantastic long weekend.  We had a great New Year’s Eve filled with an afternoon of family and food and an evening of hanging out on the couch with a few cocktails.  Perfect day.

As we sat on the couch and watched NYE celebrations on television, Rock and I added up my mileage and reflected on the year for us as runners.  It was without a doubt, a very exciting one.

I rounded out the year with 1681 miles.  Considering that I was pregnant for most of it, I am pretty pleased with this number.  I came up short from last year’s mileage by 369 miles.  Not too bad.

From January through June I was logging 170+ mile months.  I was definitely running at a slower pace, but still able to get a few good long runs in.

In March, Rock and I ran a St. Patrick’s Day race down in Florida.  It was an impromptu race and I promised him I would take it easy.  But I did turn it up a notch when I noticed I was in 5th place with a mile or so to go.  I picked up the pace a tad and wound up 3rd female overall.  Who says you can’t race a bit while pregnant?! 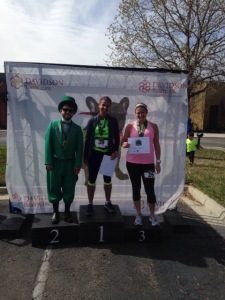 In May I coached Team Momentum at the Chicago Spring 13.1.  This was a really fun event as we were the official charity for the race (and are again this year).  I ended up running a bit over 16 miles that day.  The icing on the cake was when Rock finished his race with Zach and came back out on the course to help me with the final finishers on our team.  We have always been so lucky to work really well together and enjoy working as a team. 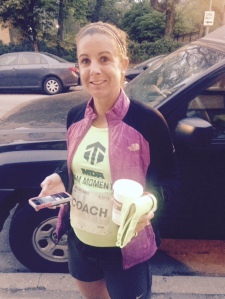 I continued to coach through the summer, until the doctor said I should hold off on running for a week near the end of my pregnancy.  And that was when Mary decided to show up a little early.  And our lives changed forever…….

I was so lucky to have a doctor who was also a runner.  She had me back out running just two weeks after Mary was born.  And a few weeks after that, I decided to wing it and run the entire Chicago Marathon, not for myself but as a coach for MDA Team Momentum.  The best part of that day, besides helping 150+ athletes finish their races, was spending the entire time with Rock.  It was our first opportunity to be alone without the baby and we stayed out on the course for over 5 and a half hours together.  Talk about a hot date!

The year was complete after we did our first real race, post baby.  Despite being sick the week before, I had a great run and ended up 2nd in my age group.  It was a huge confidence booster for me.  And it was another hot date for Rock and I.  We even ran most of the race together. 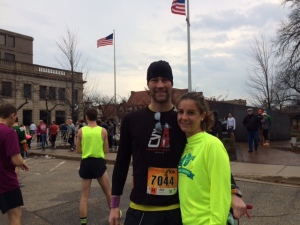 2015 was truly a special one for all of us.  We grew as a family and our hearts have grown immensely as we have gotten to know our little girl.  We continue to learn how to work together as parents and as coaches.  And we are looking forward to starting training together for our next marathon in a few weeks.  I feel so blessed and can’t wait to see what the next year brings.

What were some highlights from your year?