A few months ago I started a post about some of the funnier moments I have had with running.  It somehow just sat in my drafts for a long time, but after the events of the past few days I think it is perfectly appropriate to hit the publish button!

On Friday, Chicago was hit with some epic winds.  We were only a few miles per hour shy of hurricane forces.  Fortunately I was wise enough to suggest that Rock and I take turns on the treadmill and play it safe.  While this was a brilliant idea, I decided to head over to Panera and grab salads for us right after my run.  I kid you not, that I was stepping back in the door when a large branch fell smack on my head.  It was terrifying, as I was carrying Mary along with me, and I ended up with a nice big welt.  Fortunately, we were both okay minus the bump that I ended up with.

Shortly after that, we headed to the rink to teach a few lessons.  I was wearing one of my favorite Lululemon cowl neck sweatshirts.  I have been going through post-pregnancy shedding and I noticed a hair on my shirt and reached down to remove it.  But I had on big winter mittens and somehow grabbed the elastic strings attached to the cowl neck and pulled it forward.  It snapped back and the metal end landed smack on my eye.  Everything went black and then tears came pouring.  A few hours later I found myself in the ER and sure enough, I had a corneal abrasion.  I have to ask….who injures themselves on their own sweater?!  The girl can skate.  She just can’t handle her apparel. 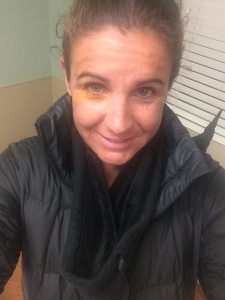 Hanging out in the ER on a Friday night.  Prime time for craziness, for sure! 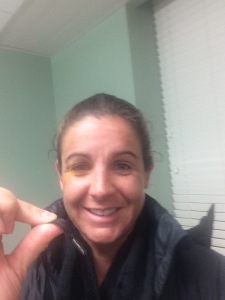 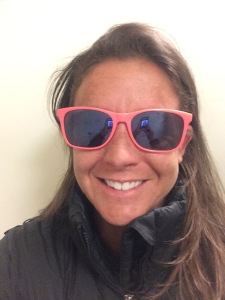 Hanging out at an indoor hockey game ala Justin Bieber style.  Too cool for school.  I almost wore sunglasses to church on Sunday!

And here are my other epic moments involving running:

The time I ran into a pole:  In 2013 Rock and I trained for a marathon together.  We were living in NYC at the time, which happens to be a rather small city geographically.  We had to run 16 miles that day and opted to do all of it in Manhattan.  I thought it would be a bright idea to run down the West Side and cut across 14th Street and head back up the East Side.  Somehow I forgot that 14th Street is incredibly busy.  As we wove around people I managed to trip and fall straight into a pole.  I ended up with a scraped hand and knees and a bruised ego.

The time I tested my skating ability:  Our first winter in Chicago was a magical one.  We fell in love with the city and were determined to run outside all winter.  One day on the Lakefront Path, we thought it would be fun to cut over onto a trail for a closer look at Lake Michigan.  I came right up onto black ice.  Now I may be a professional figure skater, but my skills off of skates are less than stellar.  I hit that ice and looked like Bambi with my legs and arms flailing around.  Somehow Rock managed to notice the ice and missed it.  Let me tell you, it was just as hard getting back to where I started as it was sliding across. 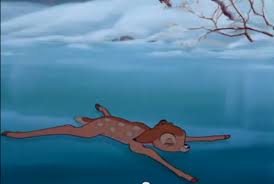 The time I turned into a human suds monster:  Sometimes on vacation, you run out of running clothes.  That is where hand washing becomes necessary.  I learned a lesson about properly rinsing clothes out when I went for a hot and humid 10 miler one morning.  A guy drove by me really slowly and was not discreet about staring.  I was livid!  What a jerk!  And then I returned home and spotted myself in the mirror.  My clothes were laden in sweat and suds.  They were rolling off of my legs and out of my shoes!

The time I was pregnant and fell face first off of the Lakefront Path:  Here’s a good way to scare a group of athletes you are training.   Start a fun conversation on a run and get a bit too animated.  Then lose your focus and roll your ankle off of the side of the path.  Fall face first and come up with bloody hands and knees.  Baby was unscathed, but my ego was not.

The time we ran into an eel:  One early morning, Rock and I were running along the East River in Manhattan.  As we came to the end of the path we ran right into a strange sight.  Rock jumped and gave a bit of a shriek.  It took us a moment to figure out what this strange sight was.  You don’t come across a large, ugly eel everyday on your runs.  (I hope.)  Side note: We also came upon a puff adder one time on a run and Rock thought it was a cobra and shoved me off of the road!  I can’t even post a pic of the snake because the sight of one makes me ill!  We were both so scared it took us a few minutes to remember that Michigan doesn’t even have cobras.

Rock also threw in the time that we almost killed a bunny…..Chicago has a lot of rabbits.  As we were running on a sidewalk along a busy street a rabbit jumped out and we frightened him.  He started zig zagging and we kept shouting, “No, no, no!” as we darted into the street.  He was okay but we were breathless and our hearts were racing.

The time we ran into the Headless Horseman:  After too many long training runs in Manhattan, we decided to take our training somewhere else.  We drove up to Sleepy Hollow and hit the aqueduct trail.  The trail cuts out at different spots and at one point we popped out into the high school parking lot.  Right there in front of us was their school mascot.  A real live horse and sitting on top was a headless man!  It was totally bizarre and gave us a lot to talk and laugh about for the rest of our run.

There are so many weird things that have happened to me on my runs over the years.  What are some of your more comical running moments?

14 thoughts on “I Have A Serious Lack of Coordination”