Once upon a time, Rock and I trained for a marathon and it was almost effortless and awesome.  No, I’m not talking about the runs.  Actually, we both had some injuries and the runs were hard.

But back in the day, we could roll out of bed as we wanted, pick a route and head out the door whenever our little heart’s desired.  We would find rail trails outside of the city, stay the night and enjoy a dinner out after.  We even slept through the night until it was time to go for a run.

Oh how things have changed!  Sleep?  What is sleep?!

Back in October, we started thinking about marathons that we would like to do in the future.  After spending the summer running  pregnant in the heat, we decided a spring marathon might be nice.  Honestly, thanks to the mild winter, training was pretty spectacular.

Rock had finished Grandma’s Marathon in Duluth, MN that past spring and he had a wonderful experience.  We decided to make a return there the following June for me to give it a go.  But he wanted to do a race too and when we saw the Poconos Marathon advertised, we decided that we would both give it a go.

We immediately reached out to a friend to see if she would come help us with childcare for the weekend and we roped some other awesome friends into joining us to run as well.  Then come to find out, fellow team members of my Simple Hydration Running Team would also be running the same race.

Then training started and everything was a bit different.  Gone were the days when you could look at your schedule, find a time that worked and head out for a run.  Instead, we had to compare both of our schedules and find time for each of us to individually pop out and get a daily workout in. 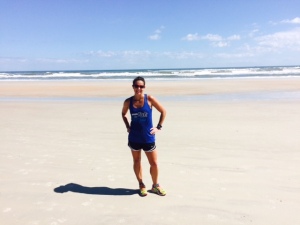 My mom is a saint.  She gladly takes the helm and watches Mary so that we can get some time together to run on vacation.

We no longer left together.  Everything was carefully coordinated.  Between work schedules at the ice rink, group training runs for programs we work with, and working with private clients, trying to find time for both of us to run became like an intricate math equation.

There were days when we saw a narrow gap in our schedules that could allow for back to back runs during lunch breaks.  We played the math.  “If you leave by this time and are home by that time, I can be ready to go out the door and get my run in and be back by another planned time.” Let’s not get started about what happens if we run late or our pace is slower than planned.  Then everything is thrown off and we start doing another careful calculation for the evening. 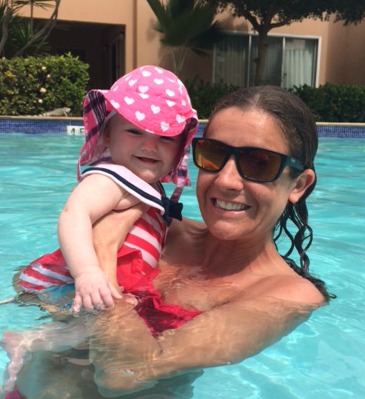 I wouldn’t trade any of this for the world. Thanks, Mary, for keeping our math skills up to par!

If we both did our long runs on Saturday, we would either have to hire someone to watch the baby or we would spend the entire day, between the two of us, running.  Plus, I had a group to coach and Rock had a hockey team working it’s way to the state playoffs.  That’s when I decided to do my long runs on Fridays and work in my planned Friday 6 milers on Saturday.  It turned into a recovery run and the result was that I really enjoyed it.  Sometimes switching things up is beneficial in unexpected ways.

Being a parent isn’t easy.  There are sleepless nights, and then there are really sleepless nights when we are living in a tiny NYC apartment for a few weeks.  There are unexpected illnesses that come home from childcare that hit both your baby and you.  Mary gave me a stomach bug that was one for the ages back in late February!   Work gets in the way.  Everything suddenly takes careful coordination, and apparently 15 bags are needed to get out the door for an afternoon adventure. 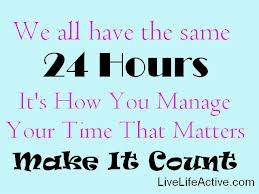 How do you make things work to get everything in?