Where do I start?  First of all, congrats to anyone who ran Grandma’s Marathon 2016. To put it lightly, it was brutal!

Kim and I arrived Friday evening in Duluth and headed directly to the Expo.  Packet pickup was so quick and efficient.   We took a quick stroll through the rest of the vendors, but as we noted, if you’ve seen one expo, you’ve seen them all.

We then headed to the Residence Inn to check-in.  Originally, we had planned on having Rock and the baby here with us.  So we booked a one bedroom suite.  But with only the two of us there, we were pleasantly surprised to see just how spacious and awesome our room was.  Full kitchen, working fireplace, huge living area, great bathroom set up, and a nice big separate bedroom with a king sized bed. 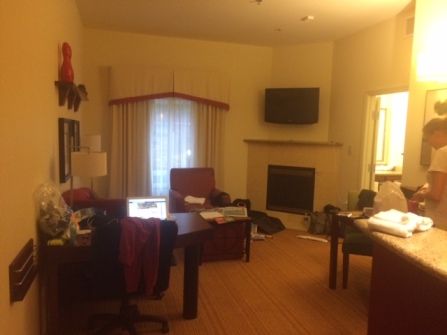 After dinner, we spent the evening looking at various weather reports.  Many called for a strong chance of heavy thunderstorms and others said we would have a slight chance of rain and cloudy skies.  We figured we would wait and see what the morning brought.

We were up bright and early, ate some breakfast, and drove down the road to the Miller Hill Mall.  We boarded a yellow school bus and made the trek out to the start of the race.  We arrived with almost an hour to spare and after dropping our bags at gear check, we headed directly for the porta potta line.

Let me be real honest and say that this was the biggest disappointment about the race.  The set up was horrific and there were clearly not nearly enough facilities.  We waited in a slow moving line for 45 minutes.  We heard the National Anthem playing and I popped out of the porta potty with minutes to spare before the race began.  This left me unable to get to the correct starting pace group.  A race of this size should not have that huge of a lack of facilities.

This wasn’t a one time problem either.  Rock told me that last year he made it out just as the National Anthem was playing and had to dash to the start.  Waiting in a line for 45 minutes in the pouring rain in 2015 blew.  Waiting in line for 45 minutes in 2016 and wondering if you should skip going to the bathroom or miss the start is a major flaw.

Getting in the wrong start time didn’t seem to matter.  Grandma’s start is based on the honor system.  If you know me, I think runners are stellar people.  They are some of the greatest people around.  But there were some pretty dishonest start paces.  For three miles I wove around walkers.  I witnessed a girl in a Prince costume shoving and elbowing people as she ran in her purple spandex get up and wig (I have never seen that happen and was pretty appalled by her behavior).

Once I got into a groove I felt pretty good…..until Mile 5.  That was when I started seeing my paces slow down with every mile.  It was then that I noticed a pain in my toe that I had been sensing off and on for the past few weeks.  It started to sing and then wavered between bouts of severe pain and numbness.

I jogged to mile 16 and started walking towards the drop busses.  I called Rock and it didn’t go through.  Annoyed, I decided to stay the course and run to mile 19 where Kim’s dad was and hitch a ride back with him.

I ran and walked.  I struggled some more and made it to mile 19.  I couldn’t find Kim’s dad.  I called Rock and told him I was going to ride the bus back to the start.  He told me he was proud of me and I left feeling okay with my decision.  I felt there was no way I had 7 miles left in me.  But when I stood near the bus and reassessed, I decided to go as slow as possible to the next chance to drop and decide from there.

I watched as the alert levels on the course went from Moderate Risk, to High Risk, and then to Extremely High Risk.  Black flags were raised.  I have never been on a course where this has happened.

For the next 7 miles, I jogged when I could and walked when my calves cramped up.  I had no control over my legs and the cramping was so terrible, I nearly fell over several times.  I did what I could when my body allowed and was okay with walking when I needed.  The cramping only allowed me to run for a tenth of a mile at a time by the end.  I gave in and just followed my body’s lead. 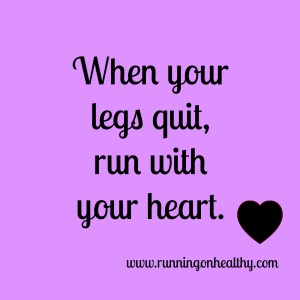 As Rock said, it was a humbling experience.  I ran this race an hour longer than my PR five weeks ago.  But it was a great reminder that the marathon truly never can be tamed.  It will always own you, regardless of how hard or how smart you train.  And running coaches are most definitely not invincible.

It was a disappointing experience and finish.  But in many ways, I am more proud of this finish than my PR and BQ last month.  It took everything in me to finish.  I struggled many times to finish and considered quitting a lot.  But I am so glad I pushed through and finished.  Mommy still doesn’t quit!

Congrats to everyone who ran, finished, and those who might not have quite been able to get there.  If you run, you are a winner.  Thank you to the volunteers for helping aid us along the way!