Happy Monday!  Thank you for all of the amazing birthday wishes for Mary.  We had an absolute blast.  It is so hard to believe that she is transitioning from a baby to a toddler.  I’m seriously not ready for this. 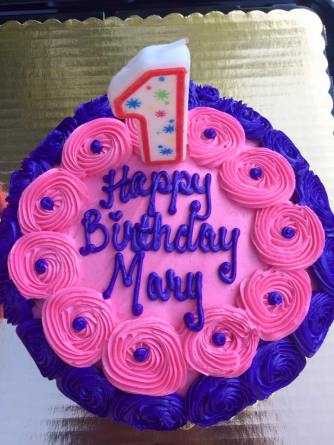 Last year, I was fortunate enough to run throughout my pregnancy.  I had the best doctor, who was a runner herself and worked in a clinic full of runners.  Not all pregnancies are suitable for running, but I was lucky enough to run up until 35.5 weeks.  At that point my doctor noted that the baby was making an effort to arrive early and I was advised to stop running until 37 weeks, when I would be considered full term.  Our goal was to make it to there so that our baby wouldn’t be considered preterm and need to go immediately to the NICU.  Obviously, no parent hopes for that.

To be honest, when I was advised not to run, Rock comforted me and asked me if I would be okay on the sidelines.  I gave a huge sigh of relief and told him it felt great to be told not to run.  In that last week it had started to feel uncomfortable and I was starting to dread running.  I felt like I had to because I was a coach and I was still coaching runners.  I couldn’t let them down and didn’t want to feel like I was failing them or myself.  Being told to take it easy actually came easily!

At 36.5 weeks my water broke and I was admitted to labor and delivery.  Fortunately, after 25 hours of labor, Mary arrived and was healthy enough that despite having two pediatricians in the delivery room, she was deemed okay to stay with us in the room.  It was both amazing and overwhelmingly scary to hold that 6 pound 2 ounce little baby.  She was finally there with us.  But yikes, what did we know about raising a tiny baby?!

I experienced some extreme blood pressure issues during delivery and was told to lay low for two weeks and then see my doctor again.  It wasn’t a problem because Mary was up every 2-3 hours for a feeding and we were exhausted.  We didn’t want exercise, we just wanted sleep!

When I saw my doctor again, she was happy to report that I was healthy and asked if I had started running again.  I said of course not because I had been adamantly told not to run and to not plan on it for awhile.  She smiled and told me to get back out there and get going.

There was a small part of me that was relieved to be back in the swing of things.  As just about any new mom wants, I was hoping to get back into my pre-pregnancy shape. 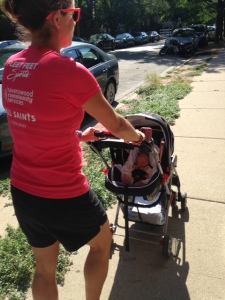 But another part of me felt like I had to get back to running.  I promised my bosses that I would be back, and while they didn’t expect me to, I felt like I had to prove to them that I kept my word.  I felt like I owed it to my athletes to be back there and not just on the side lines.  I wanted to be running their 20 miler with them in four weeks.  A lot of it was ego.  I needed to prove to myself, my bosses, my runners, and also my readers that I was a committed coach and runner.

And so at 2 weeks postpartum, I ran 3 miles.  It felt great, both mentally and physically.  When I finished I felt terrible.  I felt sick!  Two days later I started experiencing hip pain and ignored it at first.  That was until I tried to go for a run and my left foot dragged on the ground behind me.

Pregnancy releases a hormone called relaxin that loosens your hips and pelvic region to allow for delivery.  It takes several weeks or even months for the hormone to remove itself from your body and for your joints to tighten back up.  My hips were essentially “wobbly” and I pinched a nerve in my lower back.

Beyond the physical pain, there was just the pressure I put on myself.  I felt like I needed to get back in shape and show everyone that I was serious about my job and the sport.  I was eager for Mary to fall asleep and to get workouts in, clean our messy house, and get life back in order.

Looking back, she was so tiny and there were so many times where I could have held her in my arms and enjoyed more quiet moments of just us snuggling together.  This isn’t to say that I neglected her or didn’t hold her a lot.  But, that time is fleeting.  Those moments of tiny baby snuggles don’t last long and soon they are wiggling, crawling, and pushing away from you.

And that job that I felt was such a priority and so important to show my dedication to?  I don’t even work there anymore.  I felt I owed it to them to get back as fast as possible and looking back, it really wasn’t that important!  You just never know where life will take you.  But your babies will be yours forever.

While I am thrilled that I ran through pregnancy and bounced back quite quickly, there is another side to that story.  Our bodies will come back to their former selves whether we do it in a few weeks or a few months.  Running will still be there whether we come back in a few weeks or even a year.  But our babies are only babies for a very short time.

To any new or expecting mom, give yourself the grace to skip some workouts.  Allow yourself some extra naps holding your baby on your chest.  Trust me, you will sleep again.  And before you know it, your baby won’t be a baby anymore.