Happy Monday!  What an awesome week we had around here.  I think it is going to take another week for us to recover from all of the fun and adventures.

Last Monday we hopped in the car and headed to Chicago.  As you may recall, I did my first outdoor run since August and got in a pretty stellar 10 miler.  My body was definitely feeling it the day after, but it was totally worth all of the aches and pains.

On Thanksgiving morning we headed over to Winnetka where we tried out a new Turkey Trot.  In the past, we have done the North Shore Turkey Trot.  But the prices of that race are rather hefty and the amenities are pretty lame.  On top of that, I never received my age group award from last year and RAM Racing pretty much told me to stop contacting them about it.  Lame!

So this year we opted for a 5k down the road from us.  I typically despise 5k’s because I am incapable of not getting too competitive and end up sprinting until I make myself sick.  However, this year was different because Mary joined us for her first race.  I pushed her for 3.1 miles and we averaged just under 9:00mins/mile.  I can’t complain about that as it was my first time pushing the stroller since July and the race started out on a crowded rail trail.  Strollers had to start at the back behind a large group of walkers. 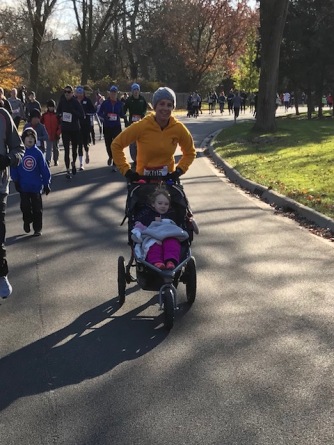 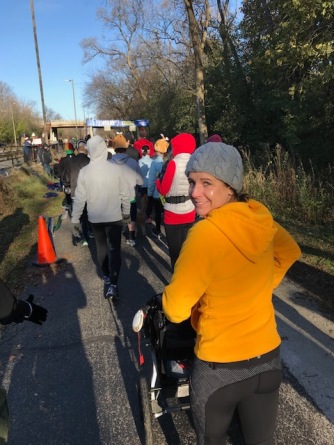 The Winnetka Turkey Trot will likely be a repeat for us.  They offered indoor restrooms and a decent aid station at the halfway point.  The race was timed but there were no medals (no problem).  My main complaint would be that when we registered and paid, we were told that we would receive a shirt.  Later, we received an e-mail that basically said, “Hey! Good news, we are giving away hats instead.  But we know you guys also like shirts so you can buy those too.”  Honestly, I would prefer a fleece hat to run in over the cotton shirts they offered.  But don’t advertise one way, and then switch it up after we paid.

We also registered Mary for the kids race and I am happy to report that she had an absolute blast.  Kids did get a cotton shirt with their race registration and she was psyched to have a “racing shirt.”  Shortly after we finished our race, the kids lined up and did a 20 yard dash.  I thought I would have to hold her hand but she proudly took off on her own and crossed the finish line to receive her plastic medal.  She was super proud.  She also insisted on filling up my Simple Hydration Bottle with orange juice, because all runners need fuel for a race. 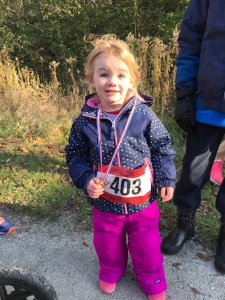 After Mary picked up her medal, we loaded her back into the stroller and ran the 3 miles back to where we were staying.  It was a perfect way to start the day. 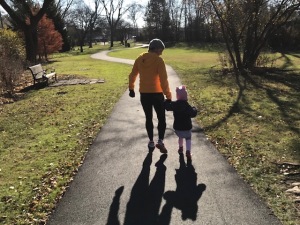 We had a lovely Thanksgiving.  Mary had a blast running around with her cousins and some dogs.  Lucy had fun being passed amongst aunts.  We ate some delicious food, but also did a decent job of not over doing it. 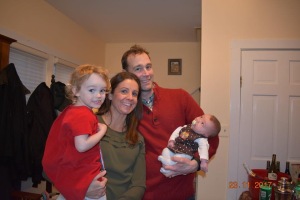 The Friday after Thanksgiving was 60 degrees in Chicago.  Talk about perfect running weather!  Despite the fact that my quads were singing from the mileage over the past few days, I did head out for a sweaty 8 mile run.  It feels so good to be running outside again and at a rather decent pace.

We spent the rest of the day playing in the park with cousins and cheering on Rock’s high school hockey team at a tournament.  The team won 10-2 and Mary loved watching the games, especially because cousins were involved.

Now we are back home and I am happily getting into Christmas decorating mode.  I honestly just bide my time until Thanksgiving passes and then break out all of the fun holiday stuff.

I’m so excited that the holiday season is finally here.  I hope you had a lovely Thanksgiving and look forward to sharing some fun holiday season tips soon.  Did you get a Turkey Trot in or a Black Friday shopping marathon?

Does anyone else get psyched when you get warm weather in late November?

5 thoughts on “Turkey Trots and Travels”