Chicago has come and gone.  This weekend is the Detroit International Marathon (good luck Kim!) and next weekend is Marine Corps.  Shortly after that is the New York City Marathon.  Yes, it is officially marathon season!

During this past race, I ran it as a coach.  This gives you a completely different perspective of the entire event.  I didn’t have my chin tucked, focusing on hammering out mile after mile.  Instead, I was running slowly and looking around for my athletes.  I was able to take in the sights and sounds of the race.  I actually read the signs on the side of the road and I heard the cheers and chants along the way.

Everything about a large road race is inspirational.  But the one thing that brought me to tears was the amount of people running for a cause; for something or someone.  It went way beyond running and in many ways, the running was a source of comfort and consolation.  It represented for many a personal struggle or perhaps even a loss.

I too was out there for a charity.  Working with the Muscular Dystrophy Association has been an eye opening experience for me.  I’ve met the families, the children and adults afflicted with muscle disease, and they have become my friends and my family.  Rock and I both held a fundraiser of our own this past fall and raised over $2100 for the MDA.  (There’s still time to donate right here, by the way!) 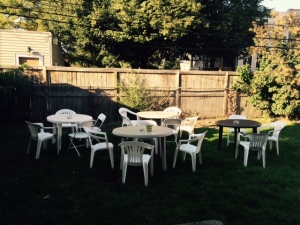 We turned our house and backyard into a bingo hall and silent auction. Did you know that Rock has a future as a professional bingo caller? Neither did we!

To meet the parents of children affected with muscle disease has changed my life in so many ways.  They are strong!  They are determined.  And they all love their children with all of their hearts.  They want nothing more than to help find a cure for muscle disease and see their little ones running beside them. One parent described his participation as a charity athlete in a way that was so compelling.  His son doesn’t get the chance to give up.  Out there on the marathon course, he could opt out and give up.  But running for his boy, pushes him to go harder and stronger, and never give up. 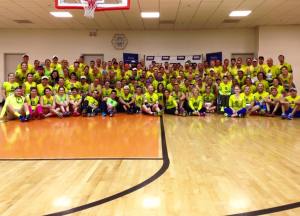 On that course on Sunday I saw athletes running for organizations big and small.  Some charities have thousands of runners, while others were a team one.  Watching their singlets bounce up and down along the course is nothing short of inspirational.

I saw a mom with a laminated photo on her back.  It was a picture of an adult male.  Below the picture it said, “I run for the son I lost to addiction.”  Try to read that as you run and not cry.  She ran for her loss and she ran to spread awareness.

I saw firemen and cops running in full gear.  I saw men in uniforms and others in costumes.  But they all did it to help spread awareness and raise funds for a cause they care so deeply for.

I know that Helly was out there raising funds for the Ronald McDonald House.  I know Susie has run for Team Challenge.  Pirate Bobcat ran for ALZ Stars.  There are so many of you awesome heroes out there.  Gloria is running Marine Corps in a few weeks in honor of her son, who is just about the cutest kid in the world!

Let me be the first to say that you inspire me.  Running for something bigger than just the marathon is awesome.  I find it amazing that one sport can do so many things at once.  You can go out there to complete a bucket list item, or to qualify for Boston, all while raising awareness and funds for something you believe in.  It was incredible to watch you all out there.  You are rock stars!

Good luck to Kim at the Detroit International Marathon this weekend.  She has been a star charity runner with multiple charities.  She’s a superhero!